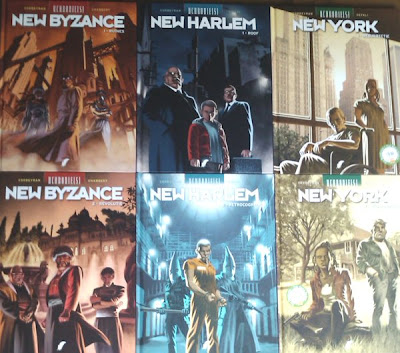 A friend gave me an excellent French series of comic books called Uchronie(s). Or is it three series ?

Each series is about a different city: New Byzance, New Harlem and New York. Or is it each time the same city in an alternate reality ?

In New Byzance people dream fragments of the story in New Harlem. In New York they see the future, or is the past ? The idea is to read the first comic of each series, before reading any of the part 2's.

All in all this is an interesting entanglement of stories, philosophy, history and cultures (to be concluded in 2011).
Posted by Paul Cobbaut at 13:23 No comments: