Making sense of a serial connection to an ss4000 NAS


update: I consider the unit bricked and will donate it to an open source enthusiast.

I'm trying to make sense of this serial connection on my Intel ss4000 nas (a better picture can be seen here). 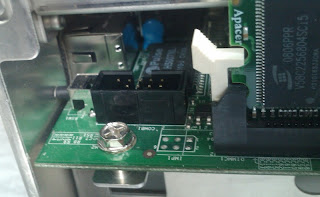 I found this dl10-db9 connector in an old computer, should be okay right ? 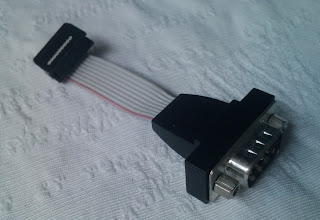 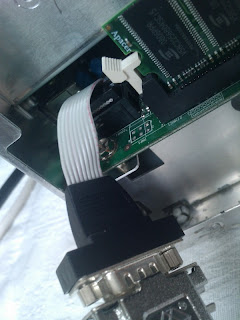 I then connect this to a brand new serial cable into a real serial port on another Debian computer. All of the following commands give a blank screen when all cables are connected and the NAS is running(*).

If I connect the little cable with the red line on the left side (pin 9 of the header according to this blog) like in the below picture, then all of the above commands give me lots of garbage (at different speeds...) on the screen. 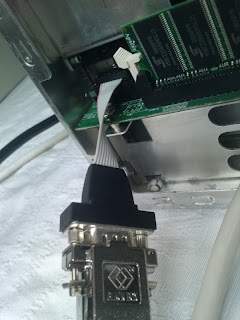 How can I get this serial connection to work ? Do I have to reboot the NAS with every attempt ?

(*) The NAS does not respond to ssh or ping since the last 'aptitude update && aptitude upgrade' :(

The sparc backup server from 2005 was up for a replacement. It was too noisy and too power hungry to keep it running, so it was turned off most of the time anyway. I decided yesterday to replace it with a qnap TS-412, but I wanted to keep the four sata disks, and preferably also the data.

One problem is that there is no way for four RAID5 configured disks to insert them into the qnap without them being "initialized" (as in completely erased losing all data).

First I wanted to be sure all four disks where still operational, which I couldn't do as long as the adaptec controller was in the sparc computer, so I had to move everything to an (already full) x86 machine... or not ?

Being a Linux user, I am generally lazy, so I figured it also had to work if I just moved the controller to the x86, leaving the disks in the sparc... not without risks:

1. the 64-bit pci card had to work in a 32-bit pci slot. Some don't... luckily this one did! The picture below shows the Adaptec controller in the x86 on the right, with the sata cables going through the back of the sparc to the four disks. 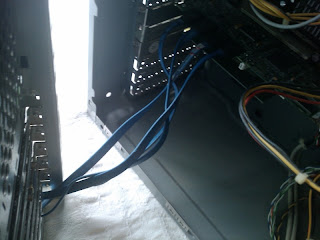 2. What to power on first, the x86 or the sparc ? Can something break if only the controller, or if only the disks have power ? I pressed both buttons simultaneously... was I lucky that it worked, or is this normal ?

3. The fricking sparc blade 1000 cover has to be shut tight for the sparc to actually power on. Note also the lack of any cables on the x86 (the left), except for the cat5. This computer has been working without keyboard or display since 2003... why bother when ssh and ssh -X can do everything! 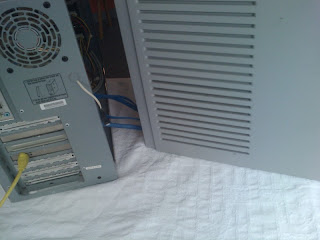 4. Will the x86 (running debian) still come up when I add an extra scsi controller? Note that this x86 was installed with Debian ten years ago, and since then upgraded to $currentDebianToyStoryCharacter. It did make the RAID5 appear as /dev/sda, but thanks the UUID= in /etc/fstab it all worked fine!

Everything worked, data was copied, disks inserted in the qnap and reformatted and all is up and running.

Just an hour ago Microsoft Windows had a small problem displaying tram and bus information here in Antwerp ;-) 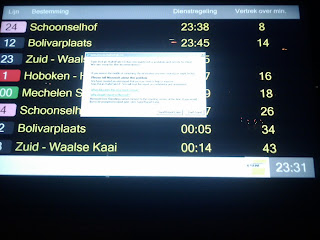