Meanwhile, i found this picture from defective by design rather funny.

Posted by Paul Cobbaut at 00:22 No comments: 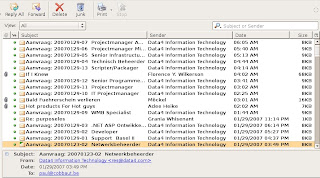 5 things most people don't know about me

After seeing Philip and Wouter joining, i can't resist ;-)

Five things most people don't know about me:
- my favorite animal is a liger
- between 1975 and 1992 i went to ten different schools
- i think about human colonies in space almost every day
- i really dislike drivers driving faster than the speed limit, they should be shot
- i actually take backups (on dvd) and sometimes put them in my banksafe
Posted by Paul Cobbaut at 18:19 No comments:

China shoots down (their own) satellite

China showed us some impressive technology again. They shot down a satellite with a missile launched from the ground. The USA and USSR already had this technology in the eighties.

The Herald wrote a pretty good article about it:
http://www.theherald.co.uk/features/features/display.var.1136449.0.0.php.

It's about time somebody stood up to the USA claiming space as their own, threatening to shoot down others.
Posted by Paul Cobbaut at 11:04 No comments:

Tips for Protecting the Home Computer

Wow, the New York Times is at it again. Only yesterday they explained about botnets, in other words they confirmed that Microsoft Windows is the origin of all the spam we are getting. And now this:
"Using a non-Windows-based PC may be one defense against these programs, known as malware..." read it all here.

Finally the mainstream press is paying some attention to valid alternatives to a convicted monopolist.
Posted by Paul Cobbaut at 11:55 No comments:

Finally this gets the mainstream news. From the article:

"In their persistent quest to breach the Internet’s defenses, the bad guys are honing their weapons and increasing their firepower. With growing sophistication, they are taking advantage of programs that secretly install themselves on thousands or even millions of personal computers, band these computers together into an unwitting army of zombies, and use the collective power of the dragooned network to commit Internet crimes. These systems, called botnets, are being blamed for the huge spike in spam that bedeviled the Internet in recent months, as well as fraud and data theft."

Read the whole story in The New York Times (free spamless registration may be required).
Posted by Paul Cobbaut at 20:06 No comments: