It took a while, but here are three books I've read. 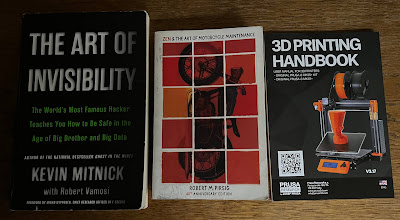 I have been interested in Kevin Mitnick since his 1980ies hacking. He is mentioned in several books that I read in the past.

This book is about all the personal data one leaves behind when using the internet (or devices connected to the internet). It is a rather simple guide on how to increase your privacy or how to aim to become almost invisible on the internet.

I would not advice this book for nerds, or for IT security experts, the book is probably not aimed for those people anyway. People who know close to nothing about computers/networks could benefit from this guide.

Robert M. Pirsig - Zen and the art of motorcycle maintenance (1974)

Now this is an interesting read. It is not about motorcycles, in fact it is perfectly fine if you replace the word motorcycle by 'smartphone' or 'computer' or 'internet privacy and tracking' in the first half of the book. There are some very insightful comments about how people react in different ways to technology.

The main part of this book though, is not the motorcycle trip with his son through the United States, but his alter ego named Phaedrus. The writer was diagnosed with catatonic schizophrenia and received electric-shock treatment. In the book he remembers fragments of this Phaedrus personality (with an IQ of 170).

The second half is a tough read. I often needed to reread several sentences to grasp what he was saying. (Which was never the case in the Mitnick book above.)

I finally bought a 3D printer and would advice this to anyone who has lot's of time. Yes, this is not yet ready for end users that only want a 'File - Print' option on the computer. But a whole new world opens, at least for me it's a new world with many possibilities and adventures.

It's a small booklet, but I mention it anyway because it is really good, as are all the follow-up guides on prusa3d.com.