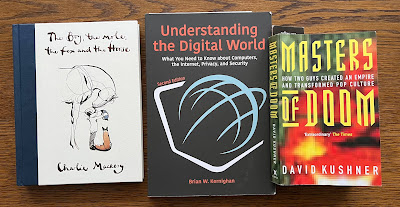 In so far as you can read this book, I read this book. This book allows you to read one page, and then ponder on it for a week. It's a story, but it is also not a story but more a psychological insight into humans. I will probably open this book again several times this year to discover even more about the meaning of a single page.

Kernighan is famous for co-authoring "The C programming Language" with Dennis Ritchie in 1978 and I have always looked up to him.

In this book he gives an excellent overview of computers and networks, including an easy to read introduction to programming, cryptography and (digital) privacy. I would not advice this book for IT-nerds, since it is way too simple. It is though as good an overview as is possible in 260 pages.

Well this was an excellent read! Enjoyable, intriguing, educational and probably only for fans of Doom or of John Carmack.

The book tells the story of the two John's that created the DooM game in the early nineties. David Kushner interviewed a lot of people to get a complete picture of their youth, their first meeting, the development of Commander Keen, Wolfenstein 3D and of course DooM, and also many games after that like Quake and Heretic.

This book is a nice combo with Sid Meier's Memoir.

I wanted to link to my tiny review of this book, which I read in 2021, but it turns out I have not written anything about it yet.

The story of the creation of the civilization series of games is a really good read, though probably only if you lived in this era and played some of the early Civilization games. Or earlier 'versions' like Empire or Empire Deluxe, which are mentioned in this book for serving as inspiration for the first Civilization game.

I like the 4X turn-based system of gaming, too bad there are almost no other good games using this (Chess comes close though).